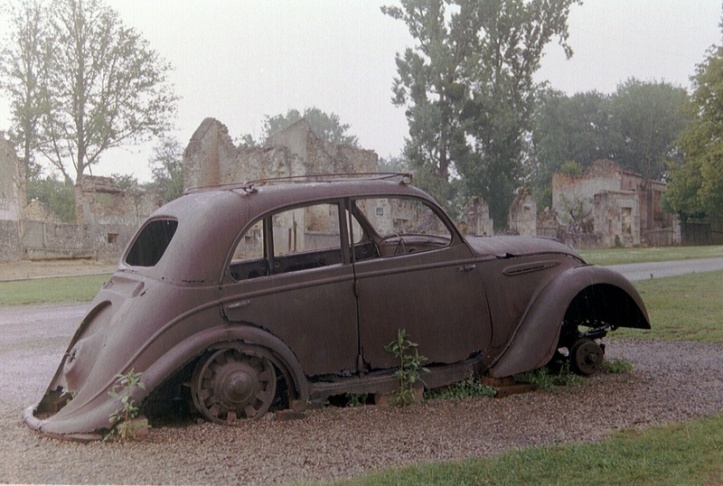 Many years ago, I bought a ‘coffee table’ book from the AA.

Secret France was to be one of those books that I’d occasionally dip into for inspiration. Places I’d never visited that might be possible on one of the many visits we made across the Channel.

If truth be told, depressing English summers usually meant that we packed the car, loaded to the gunnels, and headed as far south as we could in as short a time as possible. Five hours to the coast, five hours to Paris and then wait for the weather to change.

Sooner or later, you’d notice the sky became a more constant blue, the air would be warmer to the touch and, along the road edge, Citroen vans would be parked with picnic tables weighed down with the first peaches of summer. We’d stop, buy half a tray and savour the taste of holiday.

On one particular year, we were near Limoges . Secret France had an article on Oradour-sur-Glane. I hadn’t paid it much attention. Rather, I’d been drawn to a picture of an old Citroen 202 abandoned on a patch of grass with the driver’s door wide open. It was dull, rusty and the tyres had disintegrated. However, it was still very recognisable and the image haunted me. We had to make the short journey north-east, some 22km, and visit the town.

If you’ve never visited Oradour-sur-Glane then this is a sad and tragic account. If you have, then you will know the images stay with you, burnt indelibly into your memory.

But, wait, let’s step back a little.

Oradour-sur-Glane is a small commune in the Haute-Vienne department of Limousin France. In 1911, the population reached a height of 2,019. Today,. it’s still under 3,000. It’s a grey, rather functional town. It’s not pretty; much of it is built of concrete and with little concern for style. This is not surprising. The town you visit for your biere de pression, your cafe, or for your weekly groceries is new. It was built,  post-war, on the orders of President de Gaulle, alongside the original Oradour-sur-Glane, which remains as a silent memorial to the atrocities of the 10th June 1944.

Following D-Day, the 2nd Panzer Division was stationed north of Toulouse awaiting fresh supplies. Their orders were to head north in the bid to stop the advance of  Allied troops. One of their units was the 4th SS Panzer Grenadier Regiment. On 10th June, command of the unit was under SS-Sturmbannführer  Adolf Diekmann.

News reached Diekmann from two members of the Milice, a Vichy paramilitary force, that a Waffen-SS officer, supposedly SS-Sturmbannführer  Helmut Kampfe, was being held at Oradour-sur-Vayres, a nearby town. It was possible that the Maquis de Limousin had captured the officer on the previous day. 29 year old Diekmann was ordered to obtain thirty hostages from the village to exchange for Kampfe.

This is where the tragedy starts. Oradour-sur-Vayres lies some 35km away from Oradour-sur-Glane and German local intelligence dispatched the troops to the wrong village. On the  Saturday morning, the 4th SS Panzer regiment under Diekmann surrounded Oraduor-sur-Glane and ordered all the inhabitants to gather in the square to have their papers checked .  Even non-residents were detained, including a party of six who happened to be cycling through the village.

Women and children were locked in the church and the men were marched to six barns and sheds, where machine guns were already in place.

With nowhere to go, the men were slaughtered. Six managed to escape, one later shot walking down a road away from the village. In total 190 men were murdered and the barns were then set alight.

Attention turned to the women and children locked in the village church. The church was set on fire and any who tried to escape through the windows were shot. 247 women and 205 children died. A total of 642 deaths, almost half of the village. Those who survived had either fled the village before the arrival of the troops or had been fortunate to have been spared. After the massacre, the entire remaining population abandoned the village, leaving it exactly as it was when the Germans left on that Saturday in June.

Rommel felt that Diekmann had stepped far beyond his orders and requested a judicial review. However, Diekmann and many of the 4th Panzer division were soon dead themselves,  killed in the subsequent Battle of Normandy.

Post-war trials saw a small number sentenced for their part in the massacre; some 20 of the original 200 troops. The last charges  brought  were as recently as 2014 when one of the soldiers, who was 19 at the time, was brought before the authorities in Cologne. However, due to a lack of witness statements, the case never reached court.

After the war, de Gaulle declared the village a permanent memorial and ordered the building of a new village adjacent to the old. The population had been decimated and by 2012 numbers were only back to their pre-war levels.

In 1999, the French president  dedicated a memorial museum, near the entrance to the village. The  museum includes items recovered from the burned-out buildings: watches stopped at the time their owners were burned alive, glasses melted from the intense heat, and various personal items.

The town itself is ghostly. Everything has been left exactly as it was on that fateful day. While we were there it started to rain. It’s a place where you cannot help but to be moved. Standing in the gently falling rain, I suddenly realised just how silent a place it is. There is no birdsong, there are no birds.

By contrast, the new town is alive, in every sense of the word.

Next time you’re heading south on the A20 or the E9, why not go and see for yourself. 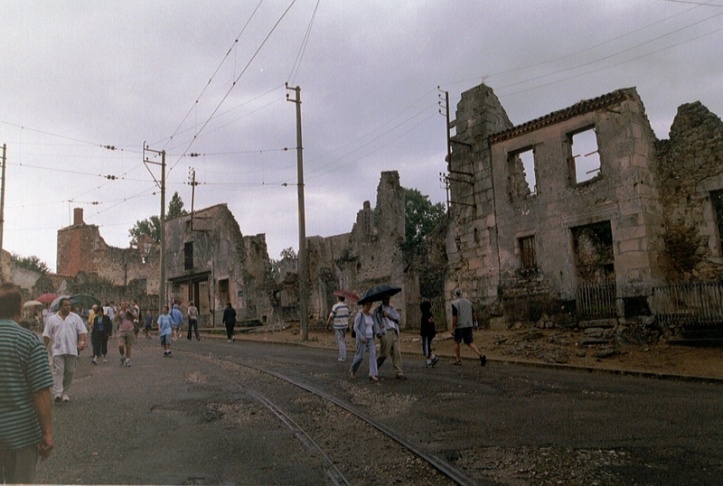